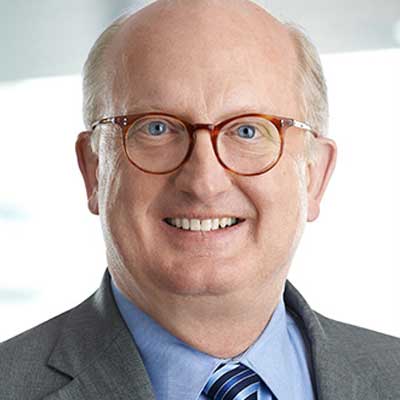 For over 35 years, David Allgeyer has been practicing in the areas of commercial, intellectual property, and employment litigation, mediation, and arbitration. David has litigated cases in the state and federal courts throughout the United States involving, among other things:

– Intellectual property in the form of patents, trademarks, trade dress, trade secrets and copyrights and related issues regarding unfair competition

– Issues regarding contractual obligations and the Uniform Commercial Code relating to medical devices, software, computer systems, and sales of various products in the electronics manufacturing, heavy equipment and other industries

Mediator. David has served as a mediator for private commercial and intellectual property matters as a member of the panel of mediators for the American Arbitration Association. He is on the Minnesota State Roster of Neutrals for mediation under Rule 114 of the General Rules of Practice.

Over the last fifteen years, David has also served as a mediator in contract and intellectual property matters, as well as dozens of matters for the Hennepin County and Ramsey County District Courts. David served as Chair of the Minnesota State Bar Associations Alternative Dispute Resolution Section in 2007 and 2008.

Leader. David is past Chair of Lindquist and Vennum’s Litigation Department, and has also led the firm’s Commercial Litigation Department and Intellectual Property Practice Group. He is a past chair of the Minnesota State Bar Association’s Alternative Dispute Resolution Section.

David formed Allgeyer Law and ADR after 35 years with Lindquist and Vennum, concentrating on resolving matters as a mediator and arbitrator.

David began his career as a judicial law clerk for the United States District Court.